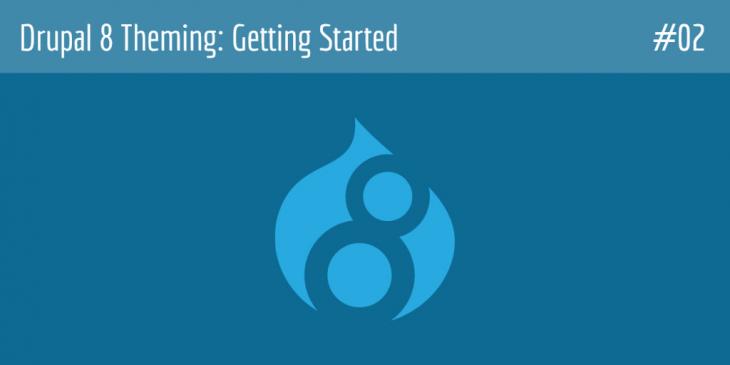 This is the second chapter of the Drupal 8 Theming: Getting Started series. In this chapter, you are going to review the admin interface and the file structure of Drupal 8.

Once the Drupal 8 installation is finished, you get a new admin menu at the top of the browser window and, apparently, the same default theme as in Drupal 7 (Bartik). 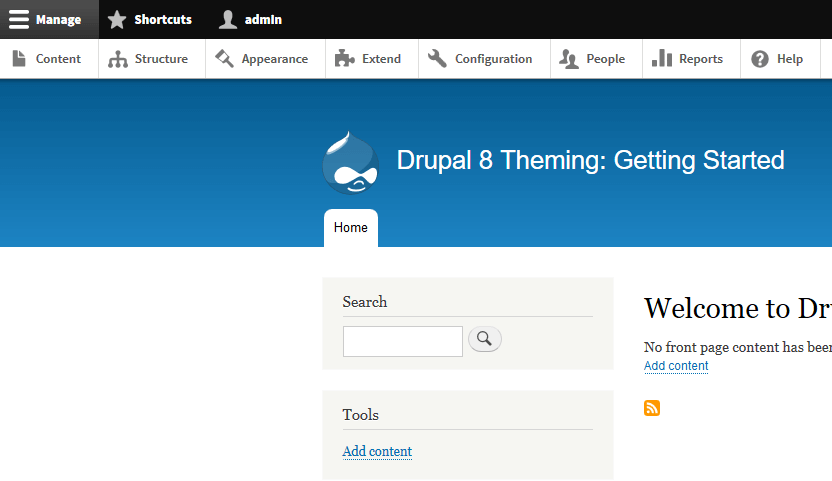 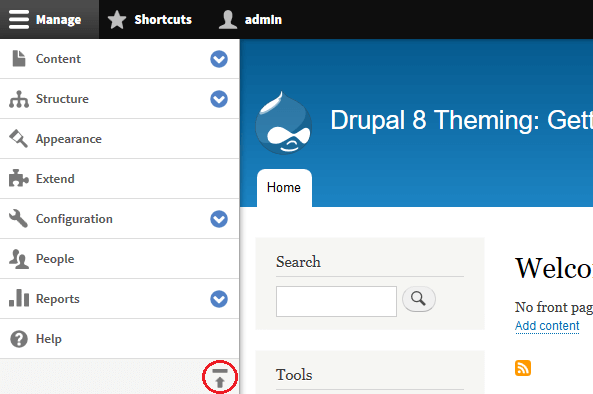 In addition, although the default theme looks the same as in Drupal 7, Drupal 8 ships with a brand new responsive layout by default, as you can see in the following image: 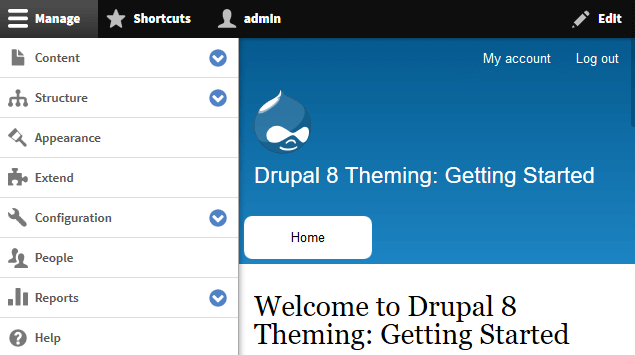 Seven, the default administration theme in Drupal 8, has a responsive layout as well, so that, unlike Drupal 7, Drupal 8 is ready to be managed easily from any kind of device.

Because the admin interface is pretty much the same as in Drupal 7, let's just have a quick look at each item of the admin menu.

1. Content: Unlike Drupal 7, now the first item of the admin menu is named Content. As you can guess, it is used for displaying and filtering the content created by the users of the site. In addition to the Content and Comments tabs, there is a new tab named Files for managing the files uploaded to the site.

The display for content is now a View. If you want to edit it, you can do it a admin / structure / views / view / content. 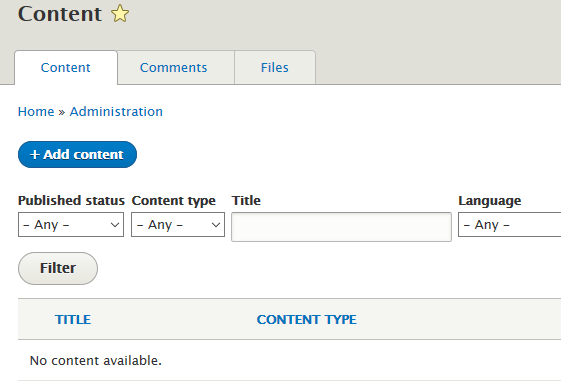 2. Structure: This menu item contains four new subitems (Block Layout, Comment types, Contact Forms, and Display modes) in addition to the ones in Drupal 7 (Blocks, Content types, Menu, Taxonomy, and Views). You will have a closer look at some of the new changes later on in this series. 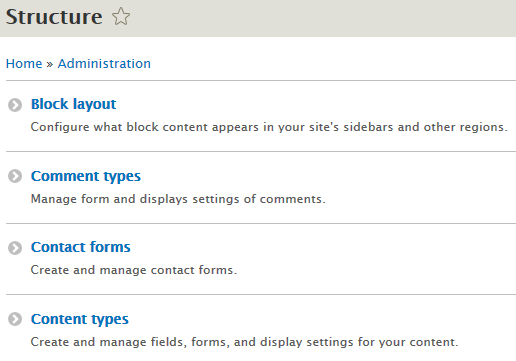 3. Appearance: This item is used for enabling, disabling, and configuring both the default and administrative themes. Because this is a series about theming, you will explore this section in detail later on in this series. 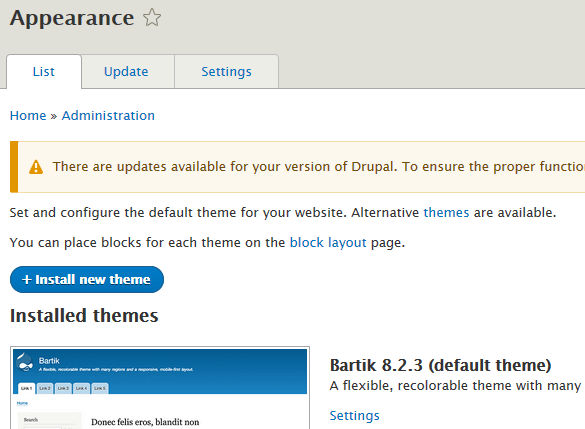 4. Extend: This item (also known as Modules) is used for installing, updating, uninstalling, and listing all kinds of modules (core, custom, and contributed modules). In order to quickly find the module you are looking for, now there is a text input box above the modules table. As you can see in the Core section, some modules such as CKEditor and Views are now part of the Drupal core. 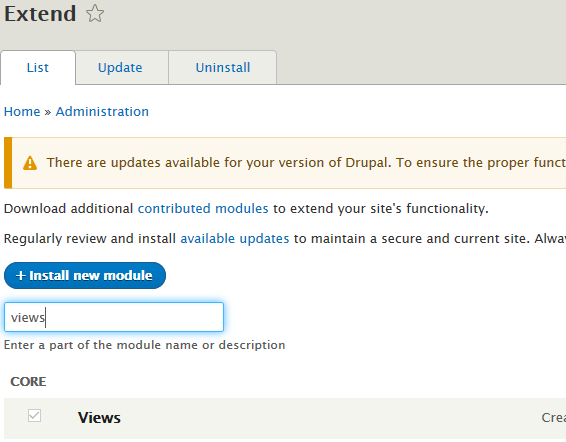 5. Configuration: This item is used for configuring the settings of both core and contributed modules. It is divided into several groups of subitems whose function is related to the title of the group they belong to. For example, the subitem for the settings of uploaded files is in the MEDIA group and it is named File System. 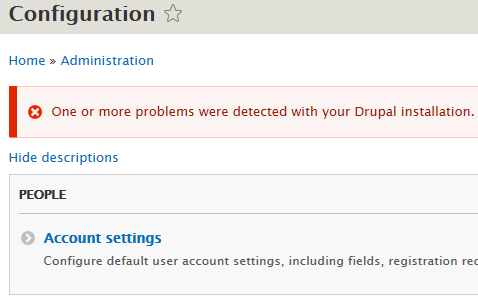 6. People: This item is used for managing user accounts, permissions, and roles.

The display for users is now a View that you can edit at admin / structure / views / view / user_admin_people. 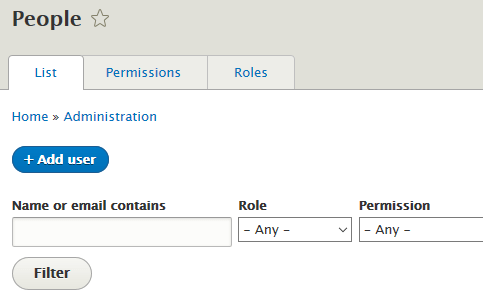 7. Reports: This item is used for viewing reports, updates, and errors. The subitems that fall under this section are the following: Available updates, Recent log messages, Field List, Status Reports, Top "access denied" errors, Top "page not found" errors, Top search phrases, and Views Plugins. If you want to scrutinise the logs of your site or get a status report, this is the right place to do it. 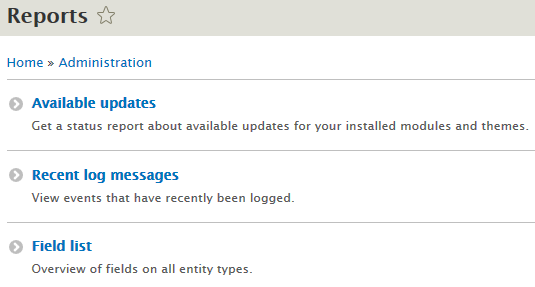 8. Help: This item is used to obtain basic information about how to get started with your website. In addition, you can find module overviews and some links to the online documentation and support pages at drupal.org. 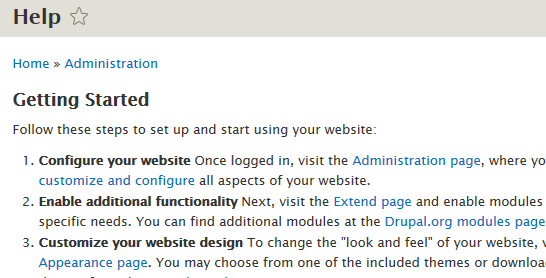 The first thing you will notice when decompressing the downloadable file of Drupal 8 is that its file and folder structure is not the same as in Drupal 7. Now all the files (those that don’t have a strong reason to be in the root directory) for Drupal 8 to work “out of the box” are in a folder named core.

If you want to go into detail about the core directory, please click me.

Although I am talking about files and folders, note that in UNIX a folder (directory) is a file that has as its purpose to save the names of the files and subdirectories located in that directory and also the inode number of each of its file names. 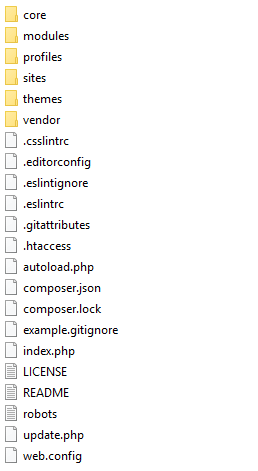 It’s best practices to create two subdirectories, contrib and custom in the modules directory for contributed and custom modules. If you plan to use the Features module, then create another subdirectory named features.